How many times have you heard that in class or with your tutor?

In this post, we’ll show you four compelling short films in English for spectacular shadowing practice.

What Is English Shadowing and How Does It Help?

English shadowing (sometimes called “echoing”) involves repeating a piece of English audio word-for-word as you listen. You might already have done this in class when you repeat a new phrase along with your teacher. You may also shadow when you sing along to your favorite English songs.

Shadowing is a great method for beginner learners to improve English speaking. That’s because it gets you in the habit of speaking English out loud right from the start.

While you may not understand everything you’re saying, you’ll be mimicking correct English pronunciation, which will set you up for success in spoken English. It’ll also get you more comfortable and confident so you improve English speaking in general.

How to Shadow English Audio Correctly

Before you start shadowing in English, make sure you’re in a quiet space where you won’t be distracted. You need your full concentration on the English audio to be successful.

You may want to listen to the clip a few times before you start shadowing. When you’re ready, press “play” again and repeat what you hear while you listen. The idea is to speak along with the audio, so you learn the natural pace, rhythm and intonation of English.

Some shadowing experts recommend adding your own expressions once you’re comfortable. Varying one or two words allows you to test what you’ve learned and practice participating in an English dialogue.

To avoid becoming overwhelmed, you’ll only want to shadow with short audio clips. Start with only a few lines of dialogue at a time. This will allow you to listen more carefully and shadow more precisely. The more you practice, the longer you’ll be able to shadow.

Not quite ready to shadow simultaneously? You can prepare with audio-learning programs like Pimsleur. You get authentic English audio, and Pimsleur has you repeat the right words and phrases at the right time. That way, you’re absorbing them naturally. You will get comfortable with English repetition quickly, and can then transfer your skills to English shadowing.

Short films allow you to listen to real-world English that isn’t too long and overwhelming. Many short films are no more than 20 minutes and some are less than 10. You can view them on your work break and practice the dialogue all day. It helps to have a written transcript if one is available.

Since short films are brief, the dialogue is typically limited and simple to follow. And since films rely on visual communication, it’ll be easy for you to determine what’s going on, so you can make the connection between the spoken English and the situation.

If you have transcripts in your native language and in English, you can shadow knowing exactly what you’re saying. Later, you can use the scripts in your vocabulary or grammar study. If no transcripts are available, use subtitles. You may even find it helpful to copy the subtitles and review them this way.

You can also use a language program that provides transcripts or subtitles. For instance, FluentU has both. The videos on FluentU are authentic (meaning they were made by and for native English speakers), so you can learn English with movie clips, news segments, commercials and other native content. 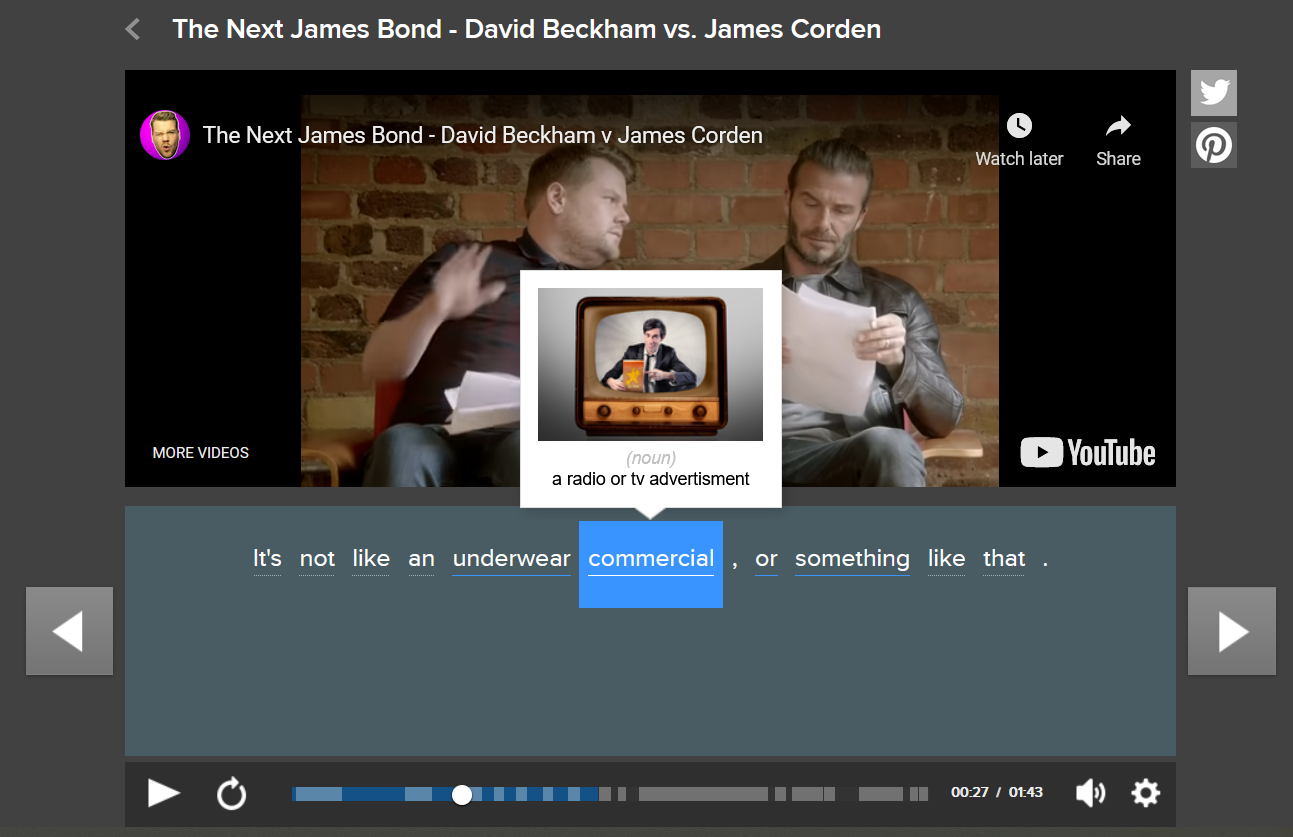 Each video has interactive subtitles and transcripts that are guaranteed to be accurate. You can hover over, tap on or click on any word in the transcript or captions for a definition and more information about the word. You can also add any word to your flashcards if you want to study it more thoroughly.

Videos on FluentU are short, so you can watch videos at your own pace. Plus, every video has an accompanying quiz, to see how well you understood the vocabulary in it. Finally, you can access this learning tool in your browser or on your iOS or Android device.

Since there are so many short films available, it may be overwhelming to find a place to start. Here’s a list of some films to get you started. They vary in subject matter so you may find one that interests you.

Of course, your options aren’t limited to this list. Use it as a starting point to find much more English shadowing practice material. If you’re already using English films in your language learning, the shadowing technique is a way for you to get even more practice.

“If Women Ruled the World”

This is a short film about a young professional woman who finds herself in a world ruled by women.

The comedic film takes place in an office environment, so you’ll have the chance to practice workplace vocabulary and business English. Since the message of the film is gender equality, much of the dialogue and vocabulary will be centered on this topic.

Note that there are also some common English swear words throughout this film.

This is an animated short film about a young girl who wants to give a gift to her parents. It’s a cute short film that’s a great start if you’re new to shadowing in English.

This film contains very little dialogue as it’s mostly centered around action, but the little dialogue you do hear is simple to shadow. You’ll practice verbs such as “to be” (I am/I was) and I need.

This is a satirical (funny; making fun of something) movie about an office meeting.

You’ll find this one a bit challenging, but you need to push yourself if you want to learn, right?

Not only do the speakers use British English, but they also speak quickly. Still, it’ll give you an opportunity to practice the shadowing technique while listening to English spoken in a comedic fashion.

You can always slow down the audio on YouTube (click the gear icon, then “Speed”), just be aware it may warp the intonation a bit. Practice shadowing on a slow speed and gradually get faster and faster to regular speed.

This is a charming short film. It’s focused on a woman who’s curious about a man she meets and a large box he’s carrying. It’s a great example of a casual, informal conversation in English.

This film contains automatically generated subtitles from YouTube. You can choose one of the characters to shadow, or if you’re feeling confident, try shadowing both.

Again, you shouldn’t limit yourself to the films on this list. Do some digging. What topic interests you? There are too many films out there to count. Get started with English shadowing by using short films, and discover how fast you improve English speaking!