10+ Resources for Learning How to Speak English Without an Accent

There’s nothing more frustrating than not being understood.

Even if your pronunciation is almost perfect, some people will have a problem understanding you because of your accent.

For this reason, many English language learners try to lose their foreign accent and talk like first-language English speakers.

Continue reading to learn how you can do this too.

Why Mastering Your English Accent Is Important

The first thing you need to keep in mind is that everyone has an accent, even English speakers.

They add personality to English, and without them, conversations would be boring. However, not all accents are easy for the average English speaker to understand, which is why it’s a good idea to learn how to speak like a native English speaker, or at least like an advanced learner of English.

Mastering English pronunciation and intonation is the first step towards speaking English without a foreign accent.

Just remember that speaking like a native isn’t something that happens overnight. It’s going to take a lot of time and practice. But if you work hard and continue to improve your speaking, you’ll begin to notice that people have an easier time understanding your English in conversations!

Which English Speaker Do You Want to Sound Like?

Native English speakers have different accents depending on where they’re from. You need to choose the type of accent that you want to learn and stick to it. Otherwise, you run the risk of mixing up two or more English accents and sounding even more confusing.

The three most common accents that you’ll come across in ESL material are American (AmE), British (UK) and Australian (AUS) accents. Click the links below to see an example of each accent.

As you can see, all three accents are different from each other, which is why you want to stick with mastering only one accent at a time.

While not impossible, learning how to speak English like a native will take a lot of time and practice—especially for adults. For whatever reason, studies show that children master pronunciation and learn second languages easier than adults. So, if your goal is to teach your child how to speak English without an accent, you should get them practicing as early as possible.

If you want to learn how to speak English without an accent, here are some resources to help you get started.

1. Listen to Your Target Accent

Mastering a native English accent requires you to listen to native speakers and practice speaking with their intonation and pronunciation.

For best results, make sure to actually practice using the accent while listening to podcasts and watching television shows. The best way to do this is to pause and repeat what speakers are saying over and over again. You can also record yourself and listen to how you speak, then compare it to the accents you’re listening to.

If you don’t have any English speakers you can speak with, try listening to podcasts for practice.

Another great way to improve your accent is by watching television shows.

You can watch short authentic English video clips to become familiar with different your chosen accent. The benefit of using short clips is that you can include them in any schedule, and you can get a lot done in a pretty short time.

Use the FluentU program for your listening practice and you’ll get to see real native English videos like movie clips, news segments and inspirational talks. Videos are short and sweet and come with interactive subtitles for on-demand definitions.

Since FluentU has such a wide variety of videos, you’ll get a chance to listen to many different English accents from around the world. 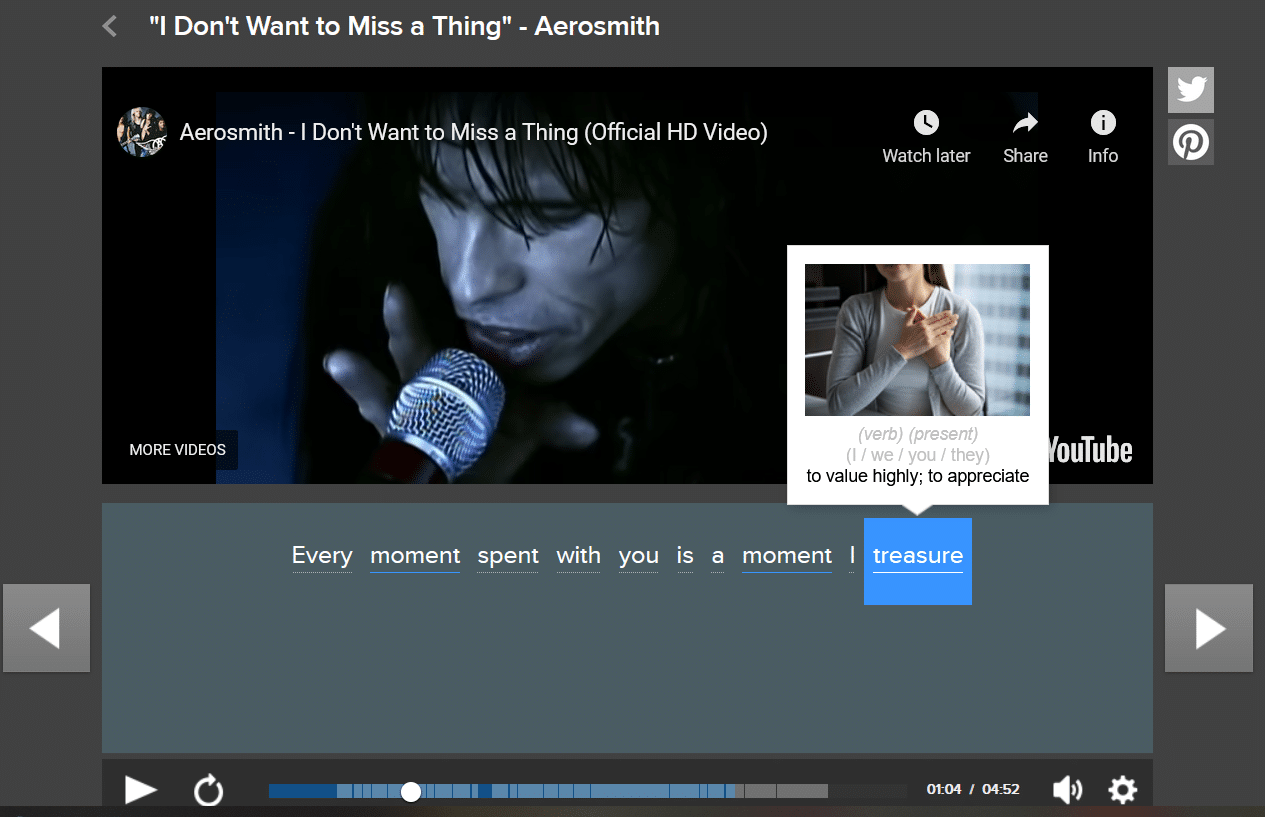 Good pronunciation is important for talking like a native speaker. Unfortunately, many students skip past textbook pronunciation exercises for other activities, like grammar and vocabulary.

The good news is that practicing pronunciation doesn’t have to be as boring as listen-and-repeat exercises found in textbooks. Here are four YouTube channels that make English pronunciation fun and engaging:

Everyone knows that good pronunciation is important for learning how to speak English like a native, but many students make the mistake of focusing only on their pronunciation and ignoring intonation completely.

Using the wrong intonation doesn’t only confuse native English speakers, it can also change the meaning of your sentence completely. Also, people will know you’re not a first-language English speaker from incorrect intonation much easier than they will if you mispronounce a word or two.

Take a look at this video to see an example of what it sounds like to have good pronunciation and incorrect intonation. While the gentleman in the video clip thinks he doesn’t have an accent, his intonation immediately gives him away as an English language learner. Granted, he speaks just fine and is understood just as easily as a native speaker, but he does have an accent.

You can practice your intonation in the same way you improve your pronunciation: by listening to native speakers and repeating what they say while trying to sound like them.

Some good YouTube channels to help you practice your intonation include:

Remember, the only way you’re going to speak English without an accent is by practicing. Try speaking in English every chance you can get. Talk to your friends, chat with English speakers online and talk to yourself if you have to—just make sure that you’re always speaking English.

The more you listen to native speakers talk and imitate their pronunciation and intonation, the easier it’ll be for you to speak English like a native.