Today’s popular culture can teach you interesting but useless things.

Like the fact that there are cats that look like sheep, that a dance called the “truffle shuffle” exists and how to twerk for a living.

But popular culture can also teach you some really useful things, like English phrases.

If you already know how to use correct grammar and how to speak in the past tense, you can take your knowledge one step further by learning phrases to use with the past tense.

Here are common 6 phrases that are often used to talk about the past in English, and all of which you can find in popular culture. 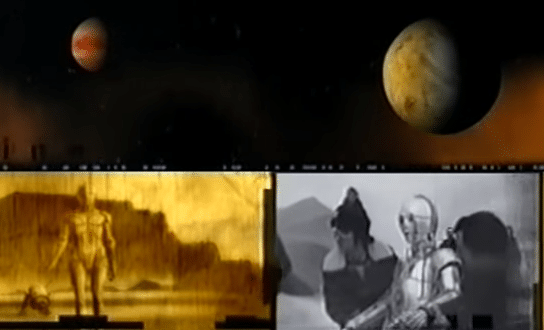 These words were the iconic (well known, classic) start to everyone’s favorite science fiction movie, “Star Wars.” Instead of wasting time showing the backstory (what happened before the movie’s story started), the movie just gave you some background on the situation with text.

The text in the movie actually follows this line with a description in the present tense, but if you were using it in conversation you would use the past tense since you’re talking about something that already happened.

“A long time ago” is actually used in a number of different places since it’s such a common saying. For example, the song “American Pie” by Don McLean has the line “A long, long time ago, I can still remember how the music used to make me smile.”

How to use it in conversation: A long time ago, [past tense action].

This phrase is most suitable for revealing facts about the past or history, like: “A long time ago, people thought the Earth was flat.”

You can also replace the words “A long time” with shorter time periods, like “a little while.”  You can also move the phrase to the end of the sentence. For example: “I saw the movie ‘Star Wars’ a little while ago.” Some other versions of the phrase are “a short while ago,” “some time ago,” “eons ago” —that last phrase means that the action happened a really, really long time ago.

2. “I used to be an adventurer like you, but then I took an arrow to the knee.” —Skyrim (game) 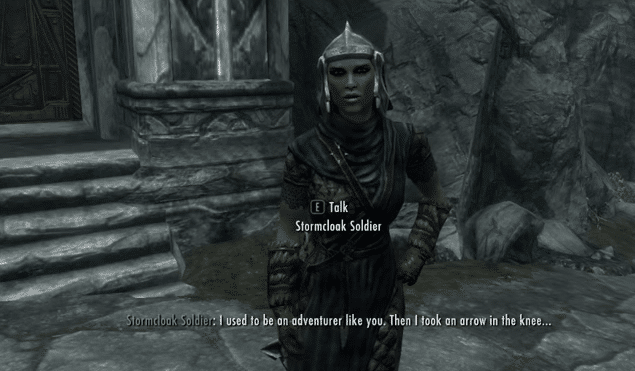 Even if you don’t play games, you might have seen this this quote floating around on the internet. It comes from the fantasy role-playing game Skyrim, and is repeated in the game a number of times as one of a number of pre-recorded sayings that some characters have.

The quote itself is actually not funny at all. The person is saying that he used to be an adventurer like the hero of the game, until he got shot in the knee by an arrow. But the amount of times it’s repeated makes it silly and memorable. From there it became a meme (commonly repeated joke) on the internet.

How to use it in conversation: I used to [present tense action], but then…

This is a great way to talk about things that you did in the past but no longer do now for some reason. You can say: “I used to play football, but then I had a back injury that made it impossible for me to play.”

This isn’t limited to actual actions. You can also talk about beliefs you used to have in this way. “When I was a kid I used to think the world was flat, but then I started going to school and learned the truth.”

3. “Last Friday night we danced on tabletops and we took too many shots.” —Katy Perry 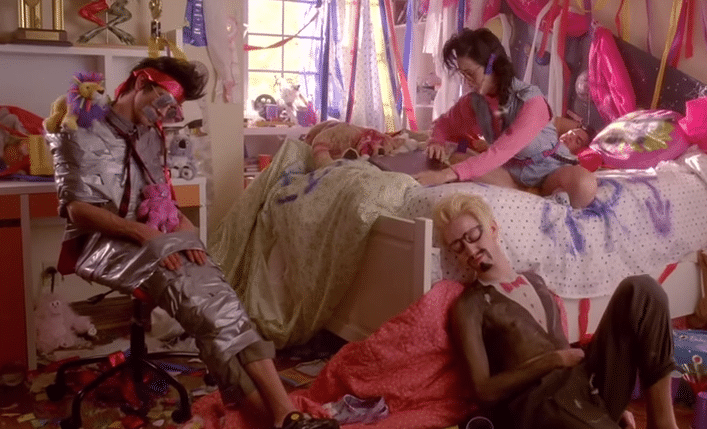 Katy Perry’s song “Last Friday Night” is about a fun party that was a little too wild. In the song, the singer is remembering what happened at the party that Friday.

You might not know that this song is actually a response to another bit of pop culture: “Friday,” by Rebecca Black. “Friday” became extremely popular on the internet for how ridiculous it is. Rebecca Black actually makes an appearance in Katy Perry’s music video for “Last Friday Night.” More useless information for you to know! But actually, it’s great to know these thing for conversations with native English speakers.

How to use it in conversation: Last [specific day or month], [past tense action].

Use this phrase to talk about something that happened in a specific time frame in the past. You can speak about “last year,” “last month” or even “last April.” The last option would mean that you’re talking about the April of last year. For example: “Last April was very warm.. but this April is freezing!”

You can also just say “last time” when you’re talking about repeating an action that you’ve done before. “Last time you tried to eat a whole pizza by yourself, you were sick for two days.” 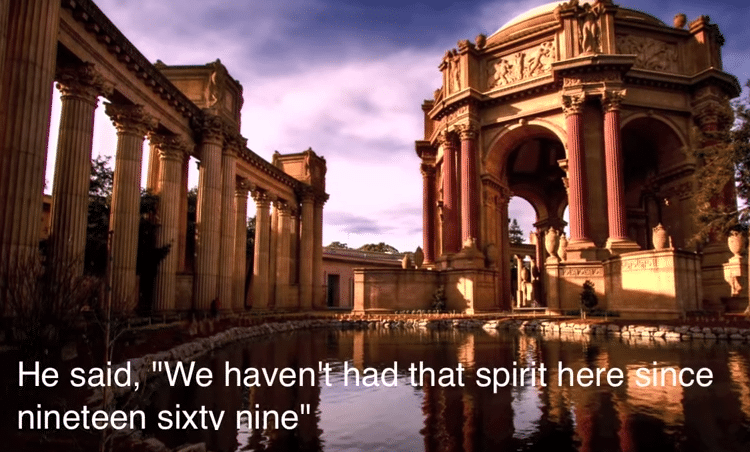 “Hotel California” by the Eagles is a haunting (hard to forget) song from the 1970s about checking into a hotel that seems inviting, but that you can never leave. This line is a response to the narrator (the person telling the story) asking for the hotel staff to bring him his wine.

A little bit of trivia if you like this song: the lyrics are really talking about how much of a trap California and “living the dream” really are. “Hotel California” is a criticism about how easily we’re attracted to wanting to be rich and spend a lot of money (the “high life”).

How to use this in conversation: I haven’t [past participle action] since [time].

Use this line if you’re about to do something that you haven’t done in a long time. Using the negative “I haven’t” puts emphasis on the fact that a long time has passed since you’ve done this action. You can say, for example: “I haven’t gone swimming since 2005.”

If you want to use a time frame instead of a specific time or date, simply change the word “since” to “in.” For example: “I haven’t eaten in two hours. I’m starving!”

5. “I could have been somebody, instead of a bum, which is what I am, let’s face it.” —Marlon Brando 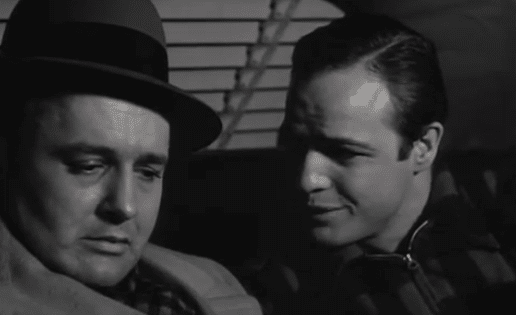 This line is from an old movie (1954) called “On the Waterfront,” but it’s still quoted a lot today. In fact, it’s ranked as the #3 top movie quote of all time by the American Film Institute. The powerful line is delivered by the famous actor Marlon Brando to his brother, about a fight that had been “fixed,” or unfairly set up so one fighter would definitely win.

How to use this in conversation: I could have [past participle action].

You can also use this phrase to say that you chose one thing over another. If you use it this way, it doesn’t necessarily have to be negative, like: “I could have eaten the brownie but the cookie looked better.”

6. “Remember when I cried to you a thousand times?” —Avril Lavigne 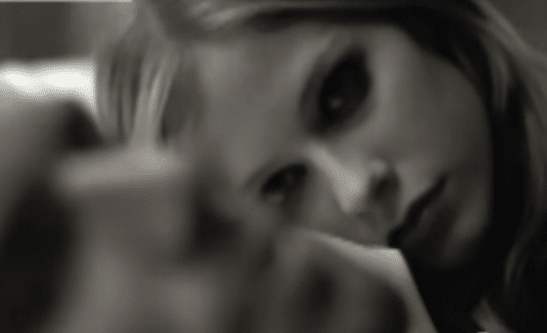 Avril Lavigne is mostly known for her songs that are in the punk rock genre, but she also has some slower songs. “Remember When” is one of those slow songs. In it Avril is remembering moments from a relationship that is now over.

How to use this in conversation: Remember when [past tense action]…

Even though the song uses the phrase to remember some negative moments, it’s actually more often used to reminisce about the past. Reminiscing is when you look back on things that happened in the past, in an enjoyable and nostalgic way. In this case you would say it to the person that you had the past experience with.

For example, I could tell you, “Remember when I told you about Avril Lavigne’s song? Wasn’t that great?”

Useful phrases are all around us. We’re listening to them, watching them, reading them.

Keep your eyes and ears open.

You’ll discover new phrases and English sayings just from listening to the radio at work!