“English is like, totally fun to learn, you know?”

If you take out the words “like,” “totally” and “you know” from that sentence, you’re left with a perfectly understandable sentence: English is fun to learn.

Those words like “totally” and phrases like “you know” are called filler words, and you’ll hear them sometimes in casual English conversations.

That’s why we’ve put together a list of 15+ English filler words which will make you sound like a native speaker.

What Are Filler Words?

Filler words are words (and phrases) that are used to fill silence when you’re speaking. They’re words that don’t add any real value to the sentence. They simply keep you going while you come up with the rest of your sentence.

Their actual name is “discourse markers,” but they’re much more commonly known as “filler words.”

You might already use filler words without realizing it. When you can’t think of the right word to use in a sentence, you might say “umm.” This gives you a break while you think, without an awkward, silent pause.

Since filler words don’t really add any meaning to the sentence, you don’t need to think about using them. This leaves your brain free to think of other things—like the word you’re trying to remember.

Many filler words actually have other meanings, so not every “like,” for example, is a filler word. We can see a real example of this in the following conversation from the show “Community,” when Pierce tries to stop Shirley from using filler words:

Shirley: Okay. These brownies are, uh—

Shirley: That’s not a filler word.

One way to finish Shirley’s sentence would be, “They taste like heaven.” In this example, “like” is used to compare brownies to heaven, so it’s not a filler word in this context.

Another example of fillers being used can be seen in this clip of Jason Schwartzman talking to Conan O’Brien on FluentU. 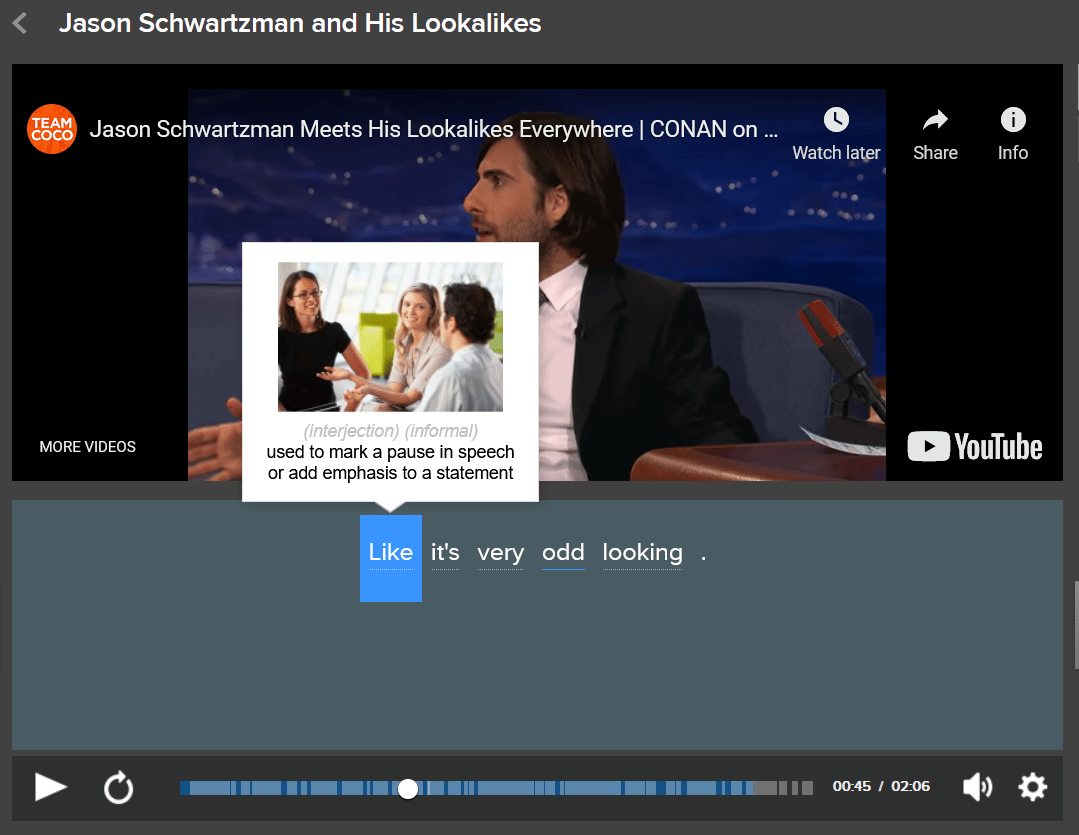 If you hover over the word “like” in that clip (or any other time Jason uses it in the same way, which is often), you’ll see that in this case it’s being used as a filler word. Click on it and the video will pause, showing you a flashcard with example sentences, audio and a definition that all show you the word as a filler.

Plus, you can watch clips from other videos on FluentU where the word is used the same way. Click the arrows to the left or right to move between video examples.

You can find many more filler words and other real, non-textbook English on FluentU, as well as its iOS and Android apps. That’s because the program uses authentic (real, natural) videos of native English, like movie trailers, news segments, interviews, music videos, funny vlogs, commercials and much more.

When Are Filler Words Used in English?

Sometimes people use certain filler words (“like,” “literally” or “believe me”) when they’re writing online in website comments, chats or social media. This is fine too, since conversations online are very similar to spoken conversations.

Filler words are used for a number of reasons:

“I have basically… ten more years of college.”

“Well, you have, um, you have a little something in your teeth.”

“It was a really big bear, you know?”

This sentence includes the listener without ending your speaking turn. Your listener might nod in agreement, allowing you to continue telling him about your pet bear.

Even if you’re just starting to learn English, filler words can make you sound more like an advanced English learner. As you can see, filler words seem useless at first, but they can be really important!

Why Should You Learn English Filler Words?

When you think of someone as being a fluent English speaker, you probably think they speak perfectly without stopping. In reality, even native English speakers use filler words, and they use them often. These words are an important part of sounding natural when you speak English.

You’re allowed to pause and think, to be unsure of how to answer, or even to forget the right word to use. The trick is knowing the right filler words to use while you put your thoughts together.

Every language has its own set of filler words. Learning English filler words will help you sound more like a native speaker.

Use Filler Words in Moderation

Some people think all filler words are bad, and should be used as little as possible. For an English learner, though, they can be a very helpful way to speak more fluently and confidently. Still, it’s a good idea to use as few filler words as possible in interviews and professional settings.

If you find yourself using too many filler words when you speak, it might be time to either study some more vocabulary or slow down your speech.

With all that in mind, here are some of the most common filler words and phrases used in American English:

“Well” can be used in a few different ways. You can use it to show that you’re thinking.

You can also use it to put a pause in a sentence.

You can even use the word to stall.

“Um,” “er” and “uh” are mostly used for hesitation, such as when you don’t know the answer or don’t want to answer.

“Um, er, I uh thought the project was due tomorrow, not today.”

You can use any of the words at any time—they don’t all have to go together.

“Hmm” is a thoughtful sound, and it shows that you’re thinking or trying to decide something.

“Hmm, I like the pink bag but I think I’ll buy the black one instead.”

“Like” is sometimes used to mean something is not exact.

Usually, though, the word is used when you need a moment to figure out the next word to use.

Keep in mind that the word “like” as a filler is seen as a negative thing. The word is often overused by young females, and can make you sound like you’re not sure what you’re talking about.

“Actually,” “basically” and “seriously” are all adverbs—words that describe actions. Many adverbs (though not all of them) have an “-ly” at the end of the word, which makes it easier to recognize them. All these words can be used as fillers which change the strength of a statement.

For example, the word “actually” is used to point out something you think is true, when others might not agree:

Other adverbs that are often used as fillers are “totally,” “literally” and “clearly.”

These three words don’t have to be used together either, but here they are in one sentence:

“Clearly you totally didn’t see me, even though I was literally in front of your face.”

“You see” is used to share a fact that you assume the listener doesn’t know.

“I was going to try the app, but you see, I ran out of space on my phone.”

“You know” is used to share something that you assume the listener already knows.

“We stayed at that hotel, you know, the one down the street from Times Square.”

It can also be used instead of an explanation, in cases where we feel the listener just understands what you mean.

“When the elevator went down, I got that weird feeling in my ears, you know?”

“I mean” is used to clarify or emphasize how you feel about something.

It’s also used to make corrections when you misspeak.

“The duck and the tiger were awesome but scary. I mean, the tiger was scary, not the duck.”

“You know what I mean?” is used to make sure the listener is following what you’re saying.

“I really like that girl, you know what I mean?”

“At the end of the day” is a phrase that means “in the end” or “in conclusion.”

“At the end of the day, we’re all just humans, and we all make mistakes.”

“Believe me” is a way of asking your listener to trust what you’re saying.

“Believe me, I didn’t want this tiny house, but it was the only one I could afford.”

It’s also used to emphasize what you’re about to say.

“Believe me, this is the cheapest, tiniest house ever!”

“I guess” and “I suppose” are used to show that you’re hesitant, or not really sure about what you’re saying.

“I was going to eat dinner at home, but I guess I can go eat at a restaurant instead.”

“I guess” is used more often in speech, but “I suppose” can sound classier (a bit smarter).

“Or something” is a sentence ending that means you’re not being exact.

“The cake uses two sticks of butter and ten eggs, or something like that.”

“Okay” and “so” are usually used to start sentences, and can be a sign that a new topic is starting.

“So what are you doing next weekend?”

They can also be used to introduce a summary.

“Okay, so we’re going to need to buy supplies for our trip this weekend.”

“Right,” “mhm” and “uh huh” are all affirmative responses—they all mean a “yes” response.

“Right, so let’s prepare a list of all the things we’ll need.”

“Uh huh, that’s exactly what he told me too.”

Right, so you should be an expert on filler words by now! Some of these words and phrases can be hard to use correctly, since the meaning is so flexible.

So now you may be wondering: how can I practice using filler words?

To get a deeper sense of how to use these, you should watch English videos. In general, videos made for English speakers are helpful in showing “real” speech. Plus, with videos, you get to see and hear how filler words work in different sentences in different situations.

Movies and TV shows are two great examples. If you have any favorite English shows, watch them again but this time, really pay attention to how the characters talk. See how many filler words you can hear!

Filler words can require a lot of subtlety, but master them and you will be sounding like a native speaker in literally no time.