11 Useful English Shopping Vocabulary Words And How to Use Them

More importantly, we love to talk about shopping.

Whether you’re talking to a good friend or someone new, it’s an easy way to start a casual conversation.

So, next time someone asks you where you bought your shoes, make sure you can continue the conversation with these shopping vocabulary words and expressions.

When Americans talk about shopping, there are some events and places you may need to know more about. We have several shopping customs that may not exist in your country. 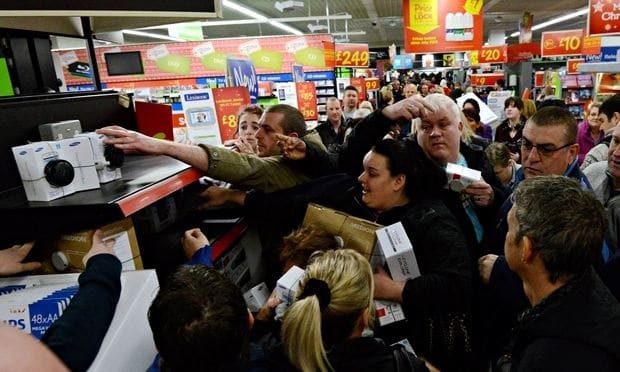 It’s not an official holiday, but since many Americans have the Friday after Thanksgiving off, you’ll see lots of people in malls and stores buying cheap gifts for their friends and family. 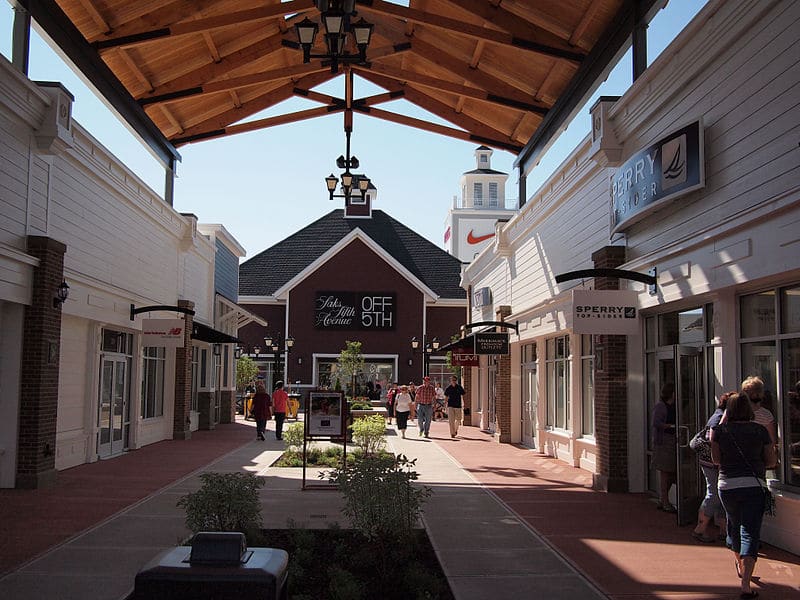 An outlet mall is similar to a mall, but they’re not the same thing. Both have many stores in one location. At both you can buy a t-shirt from the Gap, then look at watches in Swatch.

However, there is one important difference: an outlet mall sells everything at a reduced price. Many of them are large and outdoors, and Americans will often spend a full day walking around outlet malls and looking for discounts. It’s a great place to look for sales. 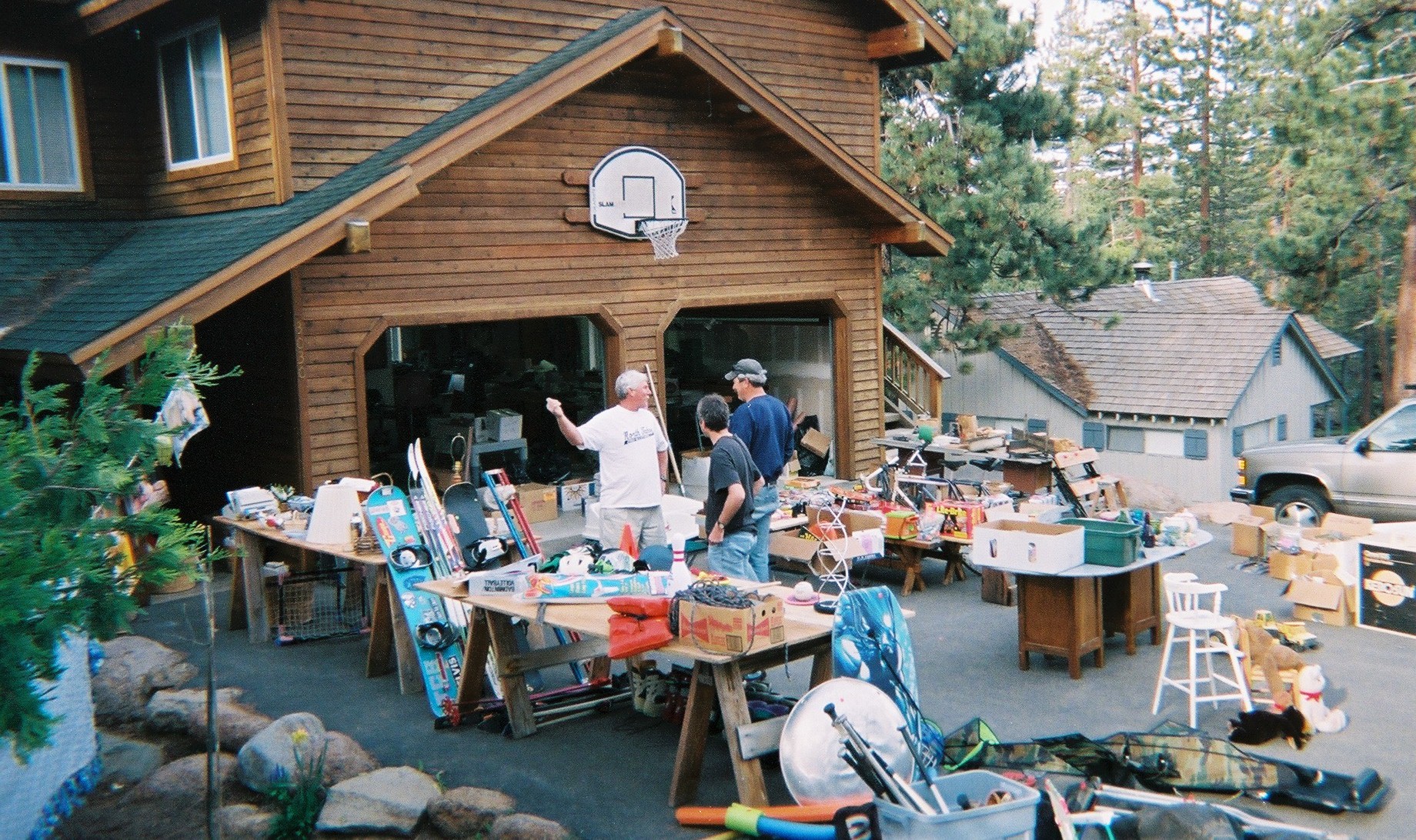 As you drive around America in the spring or summer, you’ll see large signs that say “Yard Sale” or “Garage Sale.” This is when people sell their old clothes, furniture and other items in front of their houses—in their yards or garages.

These sales are great places to find cheap used goods. Interestingly enough, it’s also one of the only times you can bargain in America. What does “to bargain” mean? Read on! 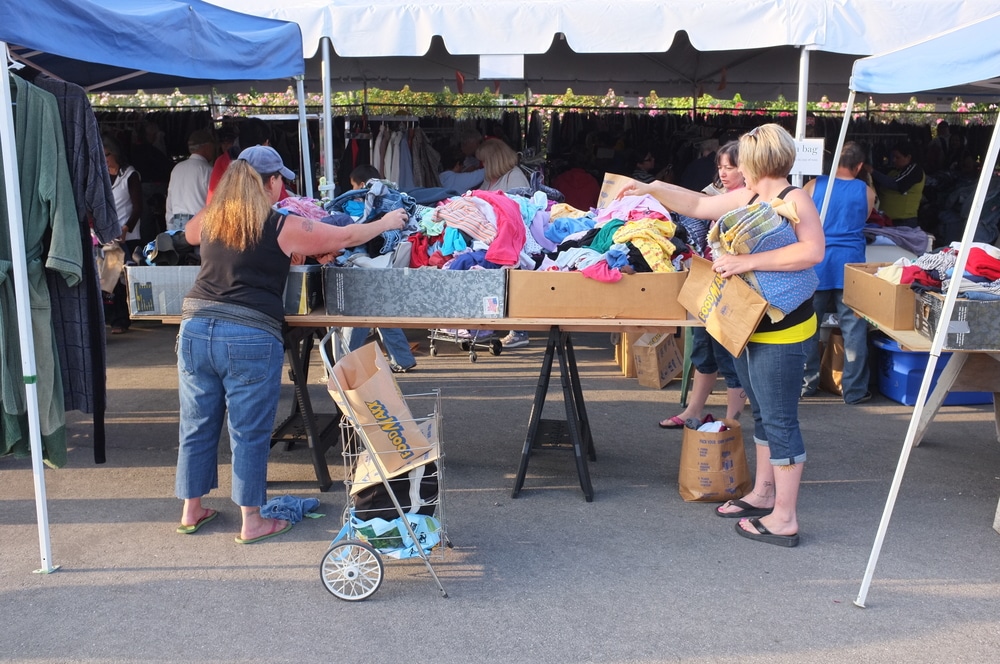 In many countries, you can bargain in stores and markets. You can ask a seller if it’s OK to pay less for an item you want.

This is not usually OK in America—except at yard sales. So, if you see a t-shirt for $4 at a yard sale, you can ask for a lower price and bargain with the person selling stuff. For example:

You: “This t-shirt costs 4 dollars, will you sell it for two?”
Seller: “How about three dollars?”
You: “Sure.”

If you buy something for much less than normal, you can call that a bargain. You may also hear people say “what a bargain!” if you later tell someone you bought an item at a low price.

For example, maybe you’re ordering food and the menu says you can buy two hamburgers for $8. Normally it’s $14 for two. What a bargain!

Or maybe, you found a new phone on sale on Black Friday. It normally costs $150, but you paid $70. What a bargain! 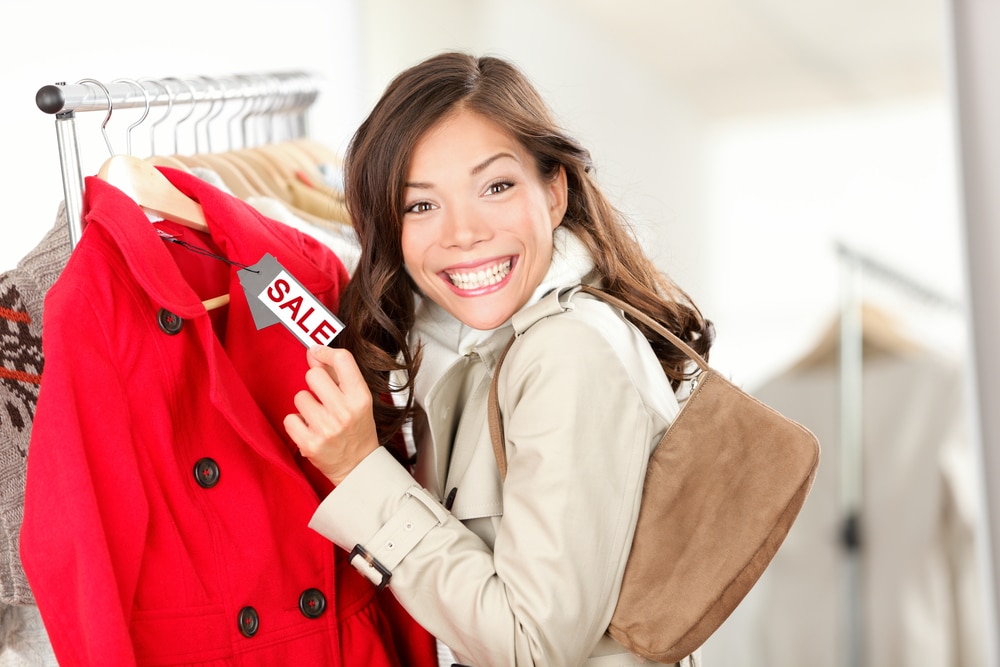 It’s wrong to steal—to take something without paying for it. But if someone tells you their new dress was “a steal,” that’s a very good thing!

That means they did not pay much for it. They paid so little that it almost felt like stealing. Actually, the meaning of “a steal” is similar to “a bargain.”

Similar to “a steal” and “a bargain,” if something is a good deal, you paid a low price. However, “a good deal” describes the price not the object or item. If you want to use it to describe an object or item, you need to say “a good deal on [noun].” For example:

So, if Jackie is telling you about the car her sister bought, you might have one of these conversations: 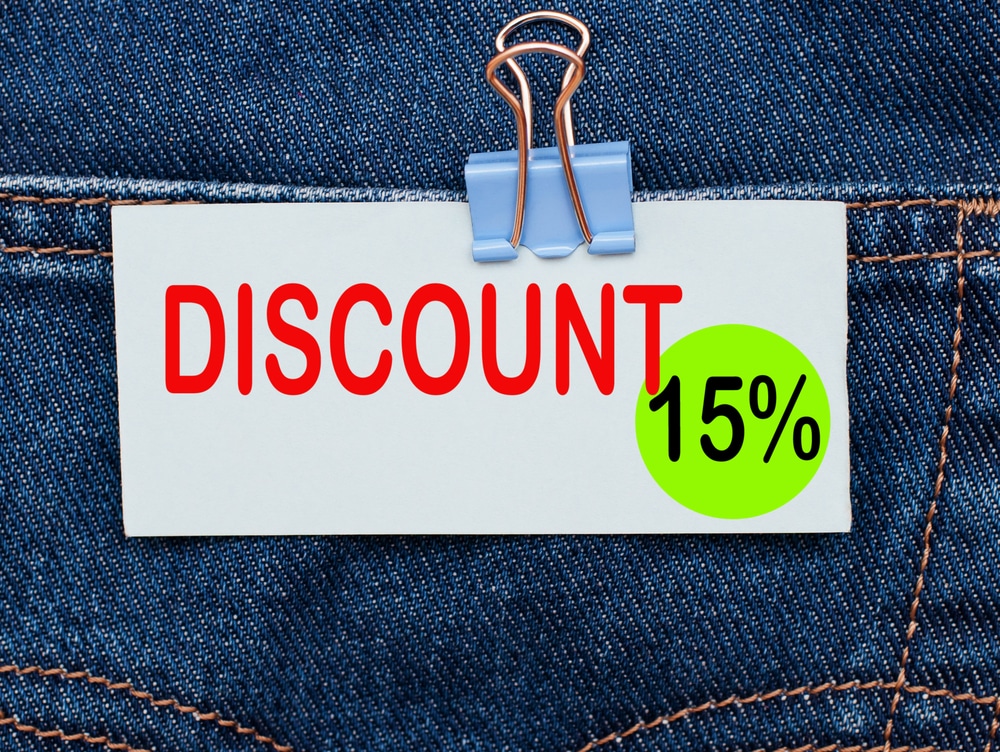 If a store is having a sale, many of their items will cost less than normal. This is called a discount. Usually you’ll see signs like:

10% off sale price: Sometimes, you can receive an additional discount on sale items.

Now, if you want to tell Jackie about the new sofa you bought you can tell her:

All of these things mean the same thing: your new sofa was a bargain!

Not everything you buy is a good deal. Sometimes, you may pay too much or you may feel like you’re paying too much. Here are some expressions you may hear when that new shirt is just a little too expensive! 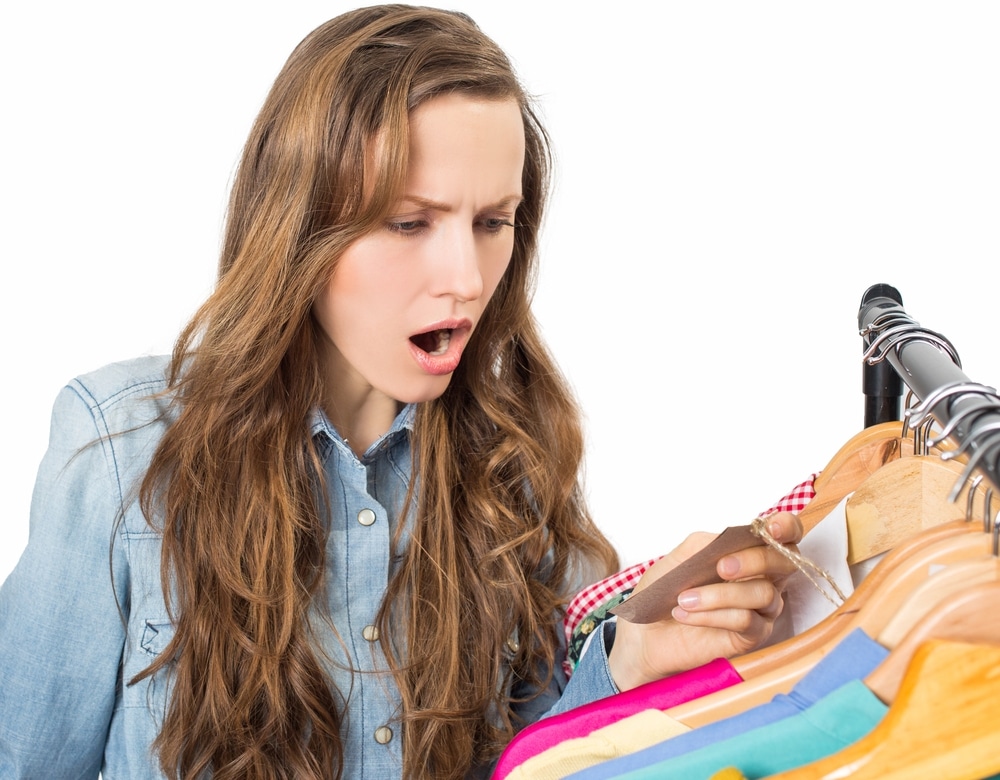 I like to go to two supermarkets to buy my food: Safeway and Whole Foods. At Safeway, the food is usually less expensive, but at Whole Foods they have more organic and healthy food.

When a store wants you to pay too much for something, that thing is overpriced. At Whole Foods, their strawberries are overpriced! If I want to save money, I’ll go to Safeway to find a good deal on strawberries.

If you think a price for something is so expensive that it’s unfair, you can call that a rip off.

Generally, when we call something a rip off, we feel like someone is cheating us and we are angry about it. For example:

You can also use “rip off” as a verb. If a person makes you pay too much for something, you can say that person ripped you off. For example:

Grammar note: If you use “to rip off” as a verb, the object comes between rip and off. So, he ripped her off. They ripped you off. 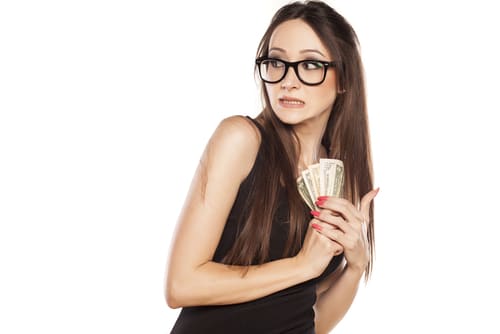 It’s not always the store that charges too much. Sometimes, the price is fair but you don’t want to spend much money.

If you’re unwilling to spend money—even when you should spend money—you’re stingy. Stingy is the opposite of generous.

So, Where Did You Get Those New Shoes?

Next time you ask your friends about their new shoes, you’ll know exactly what to say. Ask them where they bought them, and when they tell you how much they spent we hope you’ll say “what a bargain!” and not “what a rip off!”

Knowing English vocabulary for specific everyday situations can be insanely useful, and you’ll need it to be able to get around. Aside from shopping, it’ll pay off to know how to talk about groceries and food, as well as money.

To learn these expressions, you should listen to a lot of English conversations. Besides paying attention to native speakers, you can also learn by yourself by watching English videos. YouTube has plenty (maybe too many) videos—make sure you search and study from the right clips, and turn on subtitles if they’re provided!

The language learning program FluentU can also help, since its library of English videos contains content related to everyday matters. Each clip has interactive transcripts and subtitles that show what the words mean and how they’re used in context. There are also flashcards and quizzes to help you review vocabulary.

As you expand your English vocabulary, you’ll be able to have more fun conversations. When Black Friday and other major bargains come along, feel free to join in on the excitement!